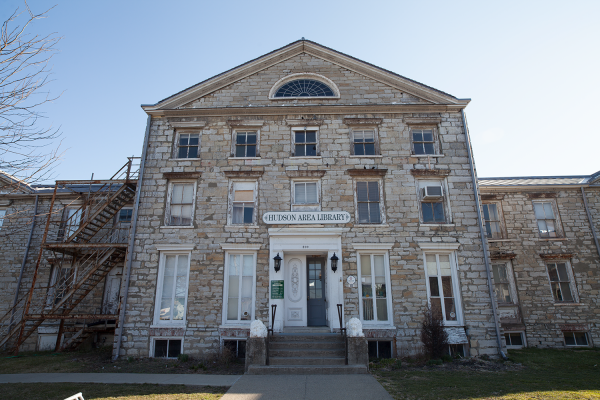 The Federal-style stone building most recently occupied by the Hudson Area Library was erected by the city of Hudson in the early nineteenth century as an almshouse to provide shelter for the poor. Over the next two hundred years, the structure successively housed a number of institutions including an asylum for the insane, female academy, orphanage, and ultimately a public library. For a brief period, the building served as the private residence of a prominent
Hudson citizen.

In 1818, the city of Hudson erected on State Street, between Third and Fourth Streets, a building to house the city’s poor and elderly. Until this time, the poor had been sheltered in a residence purchased by the city from Daniel Allen in 1801. Robert Jenkins, son of one of the founders of the city and Hudson’s third mayor, drew the plan for the new almshouse, which was built at a cost of $5,700 by Ephraim Baldwin, who worked under the supervision of a committee
consisting of John Talman, Judah Paddock, and Barnabas Waterman.